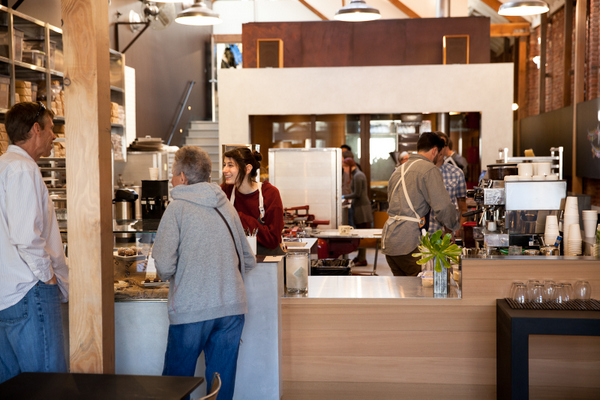 Overwhelmed by the response and encouragement for their experimental chocolate creations from family, friends and farmers’ market customers, Cameron and Todd took their bars pro and launched Dandelion chocolate in 2010. The brand is known for only using two ingredients: cacao beans and sugar. This is in contrast to adding the usual suspects often found in fine chocolate such as cocoa butter, vanilla, and lecithin. “We have nowhere to hide our flavors so we take extraordinary lengths to ensure we make a good chocolate bar” Todd divulges.

Energetic about experimentation, Todd, Cameron and the rest of the Dandelion chocolate team work with beans from around the world in favour attaining quality versus quantity.  “We love beans from Madagascar and Venezuela in particular, but have had many great beans from Costa Rica, the Dominican Republic, and Papua New Guinea. We generally don’t get caught up in the beans’ pedigree — many people put so much weight on terms like “criollo.” We like to get samples from anywhere, roast them up, and see how they taste — we’ve been surprised many times. It’s easier to make a quick test batch and use blind taste tests to see what is good.” The pair recently opened a café in front of their chocolate factory on Valencia Street in San Francisco where they serve a selection of hot chocolates and a few pastries made with their chocolate. 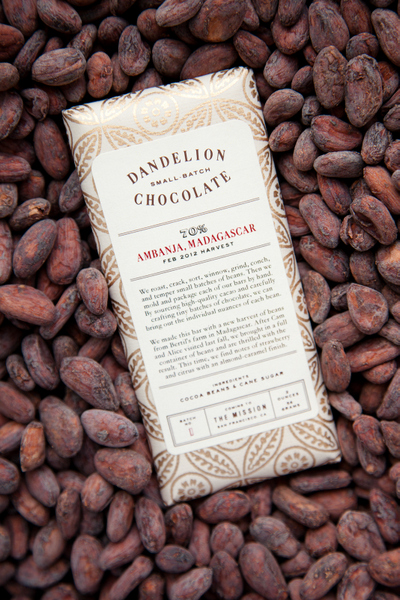 01 What is Dandelion chocolate known for and when did you guys start?
Cameron and I started working on chocolate in early 2010. Originally we were just playing around with cocoa beans in a friend’s garage, roasting them up to see what flavors we could get. Within a few months, we shared our creations with friends and family and were overwhelmed by the response. They encouraged us to make more chocolate and share it widely. From there, we started going to local markets and seeing what strangers thought. Again we were blown away by the response and realized we needed to turn this into a company.

We are known for a few things really — for one, we make chocolate from the bean. Many people don’t realize that most of the world’s chocolate is made by a few large companies and that chocolatiers make chocolates, but not the actual chocolate itself. We are part of a new and growing American chocolate movement that seeks to go back to basics and get the best flavors out of each bean. However, even within the New American Chocolate movement, we are known for only using two ingredients: cocoa beans and sugar. Without adding the usual suspects of fine chocolate: cocoa butter, vanilla, and lecithin, we have nowhere to hide our off flavors so we have to take extraordinary lengths to ensure a good chocolate bar.

02 What type of beans are used in Dandelion Chocolate bars?
We’ve tried beans from all over the world. We love beans from Madagascar and Venezuela in particular, but have had many great beans from Costa Rica, the Dominican Republic, and Papua New Guinea. We generally don’t get caught up in the beans’ pedigree — many people put so much weight on terms like “criollo.” We like to get samples from anywhere, roast them up, and see how they taste — we’ve been surprised many times, so it’s much easier to make a quick test batch and use blind taste tests to see what is good.

03  Why was becoming a bean to bar producer important to the company?
We’ll we’ve always been bean-to-bar and it’s important to us because we can control the process and make something that tastes the way we like. It’s tempting to make compromises to increase yield or lower costs, but since we start with flavor first, we often have to struggle inventing our own processes and machines to make the kind of chocolate we like. We couldn’t do that (nor any of our experimentation) if we started with finished chocolate that was intended for a mass sale.

04 How did you and Cameron transition from tech into chocolate?
It really started out of passion for chocolate. Mostly we were chocolate eaters and didn’t know much about creating chocolate. I had a chance to visit some of the chocolatiers in Paris, some of which had a tradition of making their own chocolate in small batches. That really opened our eyes to the way things could be. It’s kind of nice because now some of the new American styles are starting to trickle back to France, like the opening of the new Alain Ducasse factory in Paris. It’s fun to see things come full circle.

05 Do you think bean to bar is another fancy marketing term or something customers should pay attention to?
I think what we do is not a fancy marketing term, but as it becomes more trendy, it’s much easier to put “bean-to-bar” on a label than to do the work required. We’ve started to see where a few companies will talk about how they hand-selected the pods and went to all of this effort, when in the industry we know that it is just repackaged industrial chocolate. That’s why we created a open factory where customers can see us creating the chocolate with their own eyes and see the work involved.

06 What is your favourite Dandelion Chocolate bar?
We’ve had a lot of great bars, but I’m very partial to our Madagascar 70%. It tastes extremely fruity — so much so that people often ask us how we infused fruit into the chocolate. We have to explain that this is the actual flavor of the cocoa bean. Chocolate can actually have more flavor complexity than wine and this bean really opens people’s eyes. We’ve also had a few harvests of it now and it’s fun to see it change with the season — sometimes more citrusy, or raisiny, or strawberry.

07 How many types of bars do you produce?
We always like to have at least three bars for our tasting set. These bars are all 70% and so it’s very easy to taste the differences between them. They serve as a great introduction to what we are about. We also like to have some limited edition bars (e.g. 85% or special origins like Papua New Guinea) available in our store in San Francisco. We also rotate in and out origins with the seasons. So it’s always changing and that’s part of the fun.

08 What’s up next for Dandelion chocolate?
We recently opened up a small cafe at the front of our chocolate factory. We serve a selection of hot chocolates inspired from around the world and a few pastries made with our chocolate. So you can get a hot chocolate and watch the production process or sign up for a class. It’s what we’ve been focused on for a while now and we’re happy to finally have it open.

09 Where are the chocolates available?
The best bet is of course our factory+cafe on Valencia Street in San Francsico, but we also have bars available all over the world at select retailers. You can find the full list on our website.

10 What are some of the biggest challenges to get customers to trade up and try a premium, hand crafted bean to bar chocolate?
We offer free samples at our store and include them with every wholesale order. So it’s usually not hard to try our chocolate and we’ve found that once people try it, they are hooked.

11 If you have never tasted a premium chocolate bar such as Dandelion, where is a good place to start in terms of selecting a bar-
The best thing to do is to get a tasting set (e.g. ours or any of the other small makers) and try a few bars all at the same time. It’s much easier to taste the individual nuances of each bean by comparing them at once. I’d also try one of the easier bars (e.g. our Patanemo, Venezuela) as a good introduction and then trying the other varietals. I’d also not put too much stock in the percentage listed on the bars. Some people like bars labeled with a higher number, but that is often accomplished by simply adding more fat, so it’s better to find what you like and not worry about the label too much.