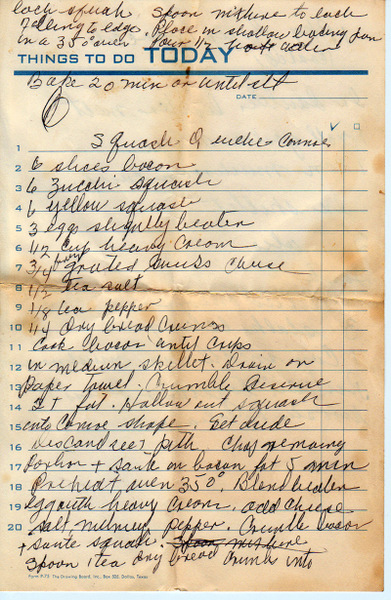 It’s funny how a philosophical question like “how much do I know about….” can lead to the start of an exciting project. For Adam Goldstein and his sister Dori, their website, Yesterdish did just that.  Drawing on his own questions and experiences about food, its history and how things evolve, the website  launched in October 2012 after Adam purchased an old box of recipe cards on eBay. The site’s  first 14 recipes included one for a fruit cobbler, an almond chicken dish and stuffed grape leaves.

A year later, Yesterdish has progressed to a growing community people who share a mutual interest and curiosity around America’s lost recipes and dishes from the past.  Yesterdish is as much about the food, as it is about sharing, preservation, history, learning and culture.

“My hope is that people will find recipes that remind them of their own recipes growing up and comment to tell us how their family made something, or the special twist that their mother used to add, or the substitution they made for the church potluck in 1972. I love the idea of making connections between people like that” says Goldstein. 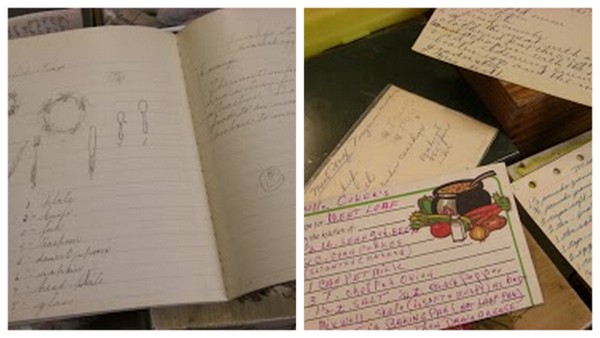 Adam Goldstein shares the story about how the idea for Yesterdish slowly came to life:

“It was a slow decision to start Yesterdish. A couple years ago, the National Archives had an exhibit called “What’s Cooking, Uncle Sam?” where they showed how government policy influenced how Americans ate over the years. I was invited to attend the exhibit by a friend of mine, Cori Zarek, who organized a tour for her alma mater as she knew I was interested in the topic.

After the tour, the group went to Jose Andres’ pop-up “America Eats!” Cafe (which is now coming back as a permanent restaurant in a different location). The concept of the cafe was to showcase modern takes on American recipes, both famous and forgotten. Among the forgotten items on the menu was a Hangtown Fry.

I’d read a little bit about it in the works of M.F.K. Fisher, but the short version of a Hangtown Fry is an omelette made with bacon and fried oysters. It got the name, the story goes, because a miner in an 1850s California gold rush town struck it rich and demanded a meal out of the most expensive items in the hotel, which were the bacon shipped from back east, the eggs that had to be packed in straw, and the oysters that divers had to catch daily.

But that started my thinking about American cooking and how little of it we really know. Not every community recorded its favorite dishes in a “church cookbook”—and even when they did, this was before James Beard or Julia Child had shown us how to lay out instructions. From what records we have of non-mainstream populations, we know the assumptions we make are often wrong.

Even within mainstream communities, recipes evolve—and as we know from evolution, not every mutation succeeds. I wondered how many recipes were being left on the drawing board and whether those could be useful today. Maybe a recipe that didn’t work in the 1940s could be made to work with molecular gastronomy, for example. 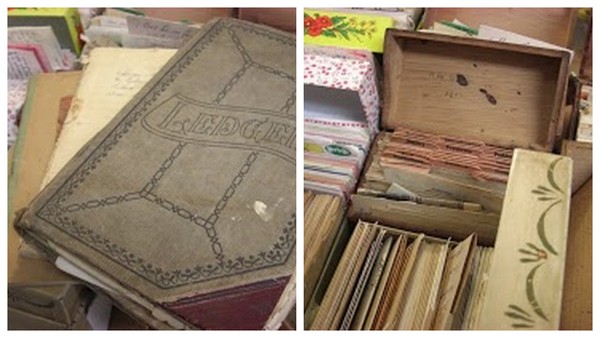 So I started to wonder… is it possible to save any of this information? And if food is politicized, how do we know what we’re eating is really the version we’d find most delicious if we had all the options in front of us? And I started looking at recipe box auctions online.

The second thing was much more direct. I saw a recipe box auction on eBay where the person auctioning the box said that, if you won the auction, you had the option to have the seller throw out the cards and ship just the box to reduce the shipping charges. I felt sick when I read that and I decided I actually had to do something. That was about August of last year.

01 What type of content or recipes can people find on Yesterdish?
I post almost everything I find in the recipe boxes on Yesterdish. Sometimes I won’t post package inserts or newspaper clippings for copyright reasons, and twice, I’ve declined to post cards that said something that could be considered bigoted by modern standards. I want people to enjoy Yesterdish as a place to learn and think about food. Randomly throwing racial slurs into the mix doesn’t appeal to me.

Because I post nearly everything in the recipe box, not all of the recipes are ground-breaking—one of the most popular posts on the site is a recipe for a Miracle Whip salad dressing. And that’s okay, I think. Just because a recipe doesn’t speak to me doesn’t mean it won’t speak to someone else.

The main content of the site is the scans of these recipe cards—there are about 1,500 so far and I’m scanning more all the time. I retype them to the best of my ability to read them, but fortunately, visitors reading behind me have helped fill in blanks where I couldn’t make out a word. I love that we’re crowdsourcing family recipes.

About a quarter of those posts have some kind of digression that I add about the history of the recipe or something unusual about the ingredients. I know I come off as an insufferable know-it-all at times, but I promise, I’m just super enthusiastic about the connections between food and history and I want to tell everyone. It’s astonishing how little credit Americans take for their food creations, partially because, historically speaking, a sense of “otherness” increases sales. I like telling the story of all-American creations like Lobster Cantonese and Chicken Kiev.

Finally, once a week, my sister or I will post a recipe that’s from our own recipe boxes. I wasn’t trying to make it an original food blog, but I felt a little bit guilty that I was exposing other family recipes without putting my own out there to be seen. 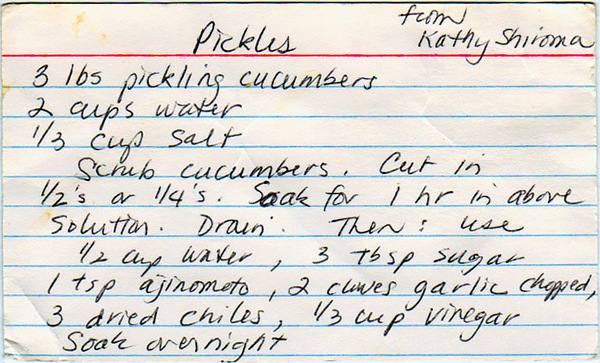 02 How long have you been collecting old recipes?
I’m a collector of old recipes now, although I wasn’t until I started Yesterdish. Until mid-2012, I would buy cookbooks, and I loved finding old community cookbooks. But since starting the site, I’ve been buying recipe boxes. I’ve bought about two dozen so far, though I’ve got another five or six to post, and I’m always shopping for more. An undocumented site feature is the map I use to make sure I’m getting a diversity of boxes. 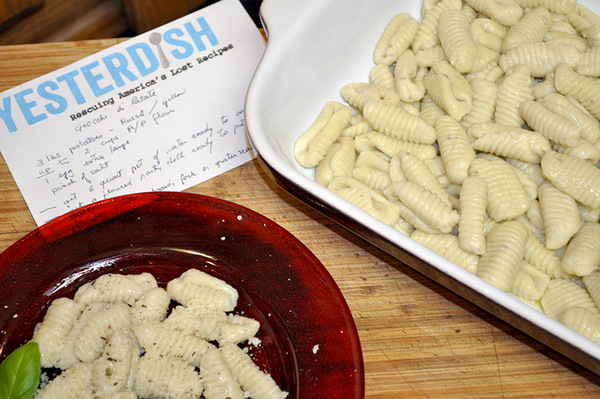 03 What is the most unusual recipe you have posted on Yesterdish?
Which recipe is most unusual depends on whether you mean that in the sense of rare or odd. I’ve never seen any other recipes for Furu Sesame Baked Chicken anywhere —I’m pretty sure this was just a local variation people enjoyed in San Francisco. There’s also Parsonage Pudding, “to be given to Ministers’ wives only.”

For oddness, it’s hard to beat the shrimp aspic ring recipe that calls for 7-Up. Shrimp, tomato juice, 7-Up, horseradish and gelatin.

04 Do you entertain at home?
Usually if I’m going to do a get-together I’ll borrow my sister’s apartment—my apartment is so small that I don’t have a kitchen table and eat off of the counter! I will almost always make fresh pasta or pizza as part of the meal and I always offer espresso or cappuccino after. I think it’s a hospitality habit I inherited from my grandparents.

Maybe I’m a little bit against the grain when it comes to serving-ware. Most of the trend right now that I’ve seen is toward plain whites or organic things like natural-edge tables and the like, but I like serving barbecue out of bento boxes or seder meals on vintage Church plates. One time I did a meal that re-created 1940s military food in a modern French style and I bought period mess hall trays to serve it on—since then I’ve found out that the military trays are larger versions of the ones they used in California prisons in the 1920s, so I’m seeing if there’s something there for a party. I actually just bought some never used McDLT cartons and I’m looking forward to serving something in those. There’s just nothing as insulating as styrofoam—except for AeroGel, which still needs to be wrapped in something to use with food. Sorry, Earth. 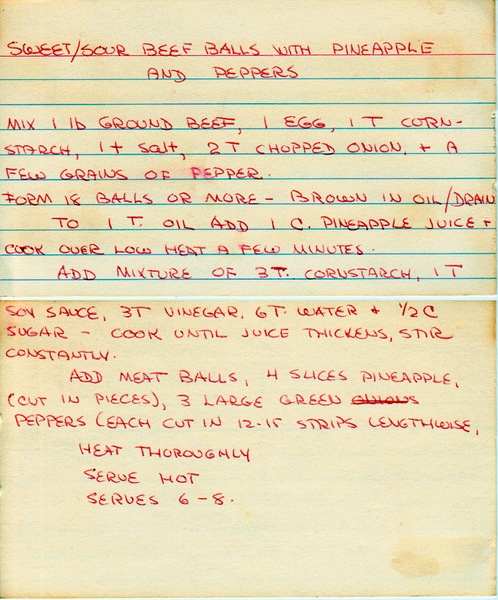 05 What is next for Yesterdish?
The next things I’m going to post are a recipe box from North Carolina and a notebook from a 1930s Nebraska farmhouse. That’s the easy part.

When we started, my sister and I thought, well, maybe we’ll collect some of these into a cookbook or something at some point, but as we’ve gone further it feels like what we ought to be doing is writing the stories of these recipes. Yesterday I had to ask my mother to translate a section of a pre-vulgar Italian poem that dozens of places cite as the earliest recipe for panzanella because not a single one of them had done it. Why cite something you can’t even read?

Usually books or blogs tell a “fun fact” about food before the recipe. Half the time the fact is wrong, but even when it’s correct, there’s no explanation of how it connects to the recipe. The history of Hummingbird Cake or Watergate Salad are examples. So I think I’d like to take a few of those recipes and really dissect the history—spend a few months in little libraries looking up newspapers.

The other thing I’d like to try is to reconstruct the culinary life of someone’s relative, at least to the extent possible, and reduce it to a few recipes. For example, if someone grew up in Philadelphia in the 1930s, and we know the address, I’d like to figure out what food sources that individual had access to, then, based on their family history and those sources, put together what a day of food would look like for someone in that location with that background. If there was a soda fountain, for example, I’d want to see if any signs, menus or newspaper advertisements exist, and from that and the state of the art in the 1930s, piece together a phosphate or malted in that style.

The only period where anyone seems to actually be doing this are the colonial cooking demonstrations at historic sites. I’m thrilled we have those, but my ancestors weren’t here for that. 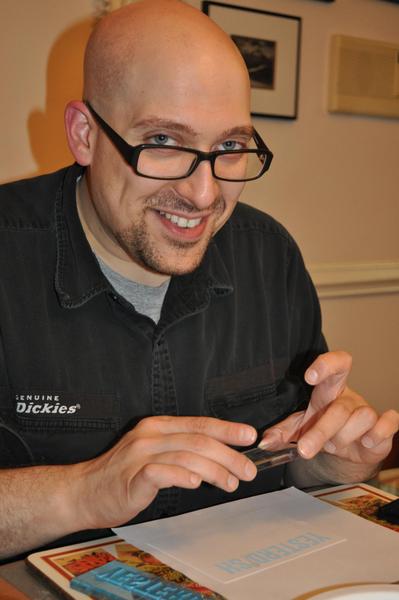 06 What is the beauty in preserving recipes from the past?
A recipe box is more than the recipes in it, really. It’s a chronicle of someone’s culinary life—sometimes the life of a few generations. I never met someone I couldn’t learn from, and that’s been true for every box I’ve opened so far.

M.F.K. Fisher answered this question better than I ever could in the forward to one of her books, “The Gastronomical Me.”

“It seems to me that our three basic needs, for food and security and love, are so mixed and mingled and entwined that we cannot straightly think of one without the others. So it happens that when I write of hunger, I am really writing about love and the hunger for it, and warmth and the love of it and the hunger for it… and then the warmth and richness and fine reality of a hunger satisfied… and it is all one.”