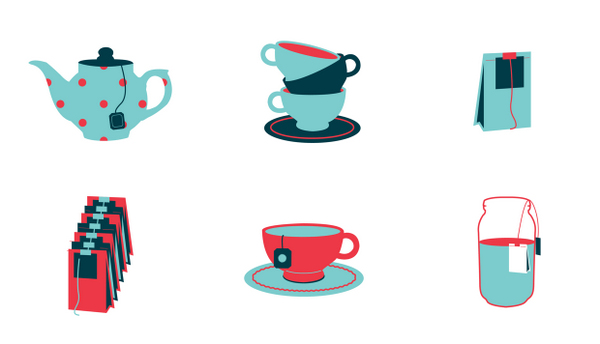 The History of Teapots

As a regular tea drinker, I have spent countless hours brewing pots of tea.  Recently, I began questioning whether all teapots were created equal.  In my experience, pouring tea from a tea pot with a shorter spout can result in a wet tabletop if you do not pour with enough gusto or the correct wrist angle.  Similarly, some pots, while aesthetically beautiful, are hard to hold or are poor conductors of heat and burn your fingers at the slightest touch, which brings me to two important questions:  How did teapot design evolve and what makes a good teapot? If necessity is the mother of invention, this is as true for teapots as it is for any other item. Since its introduction to society, the evolution of teapot design demonstrates a pragmatic response to the availability of materials in different regions, as well as a reflection of changing attitudes towards tea drinking.

The tea drinking tradition began almost simultaneously in India, China and Japan, by the 4th century, when the Camellia Sinensis tea plant was first cultivated.  The growth of tea consumption for medicinal purposes and later, pleasure, required an efficient, and eventually an aesthetically pleasing, vessel.

Dry tea initially existed in brick form – comprised of tightly packed tea powder. Chunks were cut off as needed and broken up for boiling.  Cauldrons were used at this time for mixing tea, which was served in wide bowls. Later, the powder was left loose and mixed into boiling water in a similar way.

By the 14th century, leaf infusions had become popular and teapots were required for brewing the leaves.  Some of the earliest teapots are from the YiXing region of China, made from the region’s purple clay (zisha).  These dual-purpose pots were used for both brewing tea and drinking it through the spout. The insides were unglazed: purple clay absorbs the aroma and flavour of tea, making a well-used teapot a prized possession.

By the 15th century, Chinese and Japanese populations drank tea for ceremonial, rather than solely medicinal, purposes.  This gave great impetus to the stylistic and artistic evolution of teapots.  Japanese artisans used locally available red clay, but relied upon imported Chinese methods of potting.  In Japanese tea ceremonies (chanoyu), which were lengthy and scripted affairs, tea was mixed in drinking bowls rather than teapots. Hot water was poured from an ortegama (a kettle without a spout or handle) directly into the bowls.

In the 17th century Sencha tea was imported into Japan from China, where it became popular with the middle classes as a revolt against the ‘stiff’ formality of chanoyu. Tea drinking became more relaxed, creating a need for different tea brewing equipment. Cast-iron teapots (tetsubin) developed from the previous ortegama which were originally left on the fireplace to heat water, rather than being used for serving. As tetsubin were table-top, rather than stove-side items, greater interest was taken in their aesthetic and they became more elaborately decorated with complex relief designs around the spout.

As tea was shipped from China to Europe, Europeans developed their own forms of vessel, based on traditional Chinese forms but using local materials.  The discovery of a hard-paste formula for porcelain led to innovative design from the end of the 18th century. Porcelain factories were established in a number of cities including Vienna, Venice and Berlin. Porcelain remained an expensive and therefore exclusive product, limiting tea drinking (itself expensive in Europe) to more affluent populations. At the same time, English and Scandinavian society coveted silver teapots. These received the royal seal of approval in the nineteenth century, by Queen Victoria of England.  More affordable pewter was a popular alternative amongst the less wealthy.

Towards the end of the twentieth century, clear glass teapots became common.  Design still echoes function, and glass teapots enable the user to monitor the strength of their tea. Often, these include detachable infusers for loose tea, which remains popular and better regarded than bagged varieties.

Expand your knowledge with Tea – East & West, by Rupert Faulkner

Cast Iron:  Slow to heat up but slow to cool down which means your tea will stay hotter, longer.
Silver: Fast conductor of heat. Beautiful to look at but tarnishes; May leave a metallic taste in your tea.
Stainless Steel:  Known for its insulation properties, will keep your tea warm.
Pewter:  Comes in different finishes and will not leave a metallic taste like silver.  Historically, pewter contained lead.  Today it is lead free and safe to use with beverages.

Clay: Will keep your tea warm
Porcelain: Great insulator of heat and will keep your tea warm.
Bone China:  Developed in England and made of bone ash, China stone (petuntse) and China clay (kaolin).
Stoneware: Keeps tea warm. Dense, hard ceramic that is typically thicker and heavier than bone china or porcelain.

Glass: Fun to look at
Glass:  Best material to use if you are curious about what is brewing inside your teapot but not the best at keeping tea hot.

Dunkable Recipes that Make Brewing a Pot of Tea Even Better