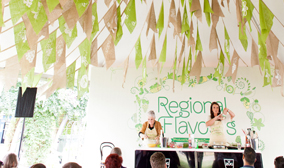 This summer the former 1988 World Expo site in Brisbane, known as the Southbank Parklands, was host to the fifth annual Regional Flavours, an event showcasing the best of Queensland’s food talent, food and beverages from around the region. The food festival featured more than 100 dedicated gourmet tents, cooking demonstrations, and courses for visitors to experience.  Brisbane is a city in the midst of a food transformation. Festivals such a Regional Flavours demonstrates to locals and tourists alike just how far the city has with respect to food.

The city has shifted from one that was dominated by elite fine dining to a more casual relaxed approach to food that puts local produce in the forefront of our cuisine. Today, diners are more likely to find a local pub serving clever crafted, artisan beers and slow roasted pork belly then a pint of something more mainstream with a side of chips. It is the growth of great casual dining that has given Brisbane a new culinary outlook that never existed. Natascha Mirosch, the Good Food Guide editor and an expert on Brisbane’s dining scene, described the city’s food transition as ‘maturing past the idea that high quality means fine dining’ in an article titled “Food Guide Reflects Brisbane’s Culinary Confidence” that was published by the Brisbane Times in April 2013.

The theme for this year’s Regional Flavours festival, ‘The Adventure of Food’, did a terrific job showing the increasing availability of high quality food in Brisbane to the festival weekend’s 40,000 visitors. 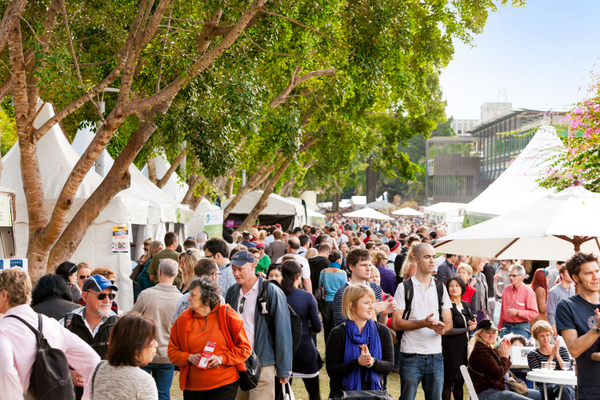 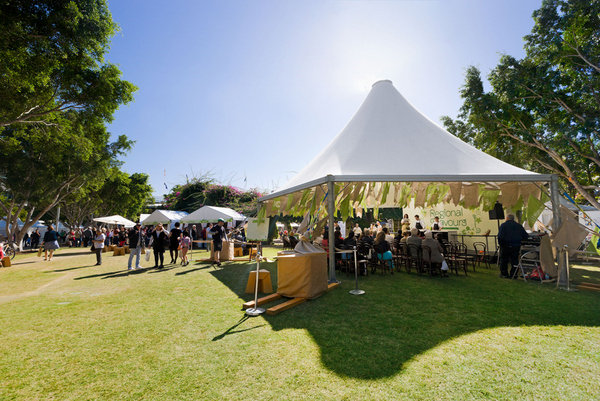 Throughout the festival, some of Australia’s best chefs and celebrity cooks were on site demonstrating and sharing their favourite tips and techniques. I had the opportunity to catch up with Paul West, Hayden Quinn and Adam Liaw, three chefs you should have on your international chef radar. 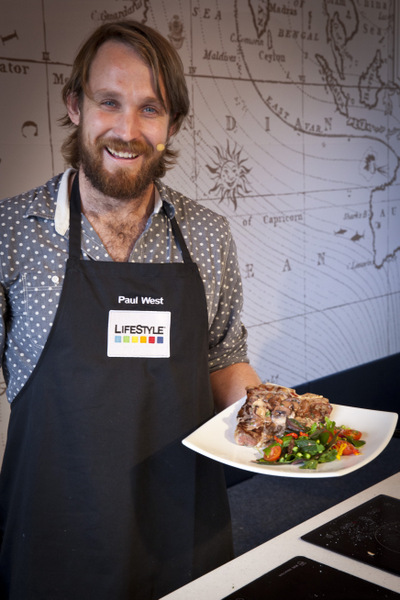 IW – How can we incorporate self-sufficiency and sustainability in our urban areas? Any tips?
PW – The best way to engage urban dwellers is in community garden groups. Community gardens are exploding in our capital regions, local governments are racing one another to get the best community garden. It’s a place you can come in as a stranger and it doesn’t isolate a particular demographic.

IW – What do you love about food?
PW – Food is the thing that unites us to the planet. We’re in the environment but when we eat, the environment is in us.  The old adage of you are what you eat I think is genuine if you eat ethically raised, organic produced food that is produced with care and love then that reflects in your mind, body, spirit, and actions. So food to me, not only does it connect us to the planet and environment from where its grown, it connects us to our community as well.

IW – When was the last time you licked the bowl and what was it you made?
PW – It was actually a plate I licked the last time, it was any oyster pie. We did a rough puff pastry, topped it with oysters and it was awesome!

“The time I spent overseas was all about exploring food, exploring surf…I learned a lot and I’m very curious about the world” – Hayden Quinn 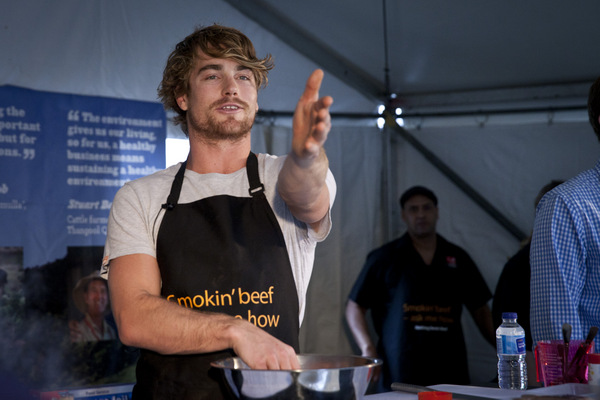 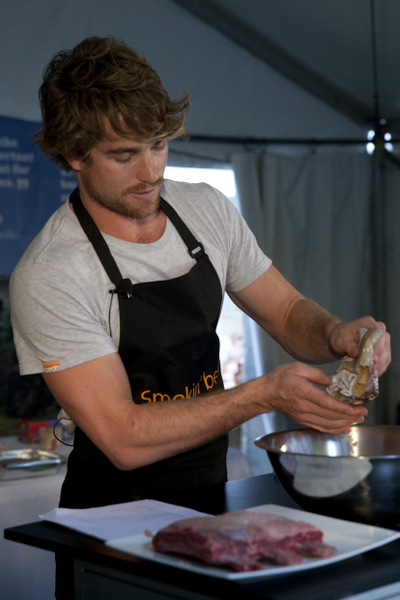 02 Hayden Quinn- Hayden Quinn is a Season Three- Master Chef contestant and an ex-lifeguard from Sydney’s northern beaches.  He attributes his passion for food to his love of the sea and surf.  Quinn is currently is releasing a cookbook in December called Dish It Up. He was happy to update us on his food journey.

IW -Hi Hayden, What do you love about food?
HQ – Food for me has always been about fuelling my body and a sense of adventure. It has taken me places, it has given me experiences, challenges and stories that I will be able to hold on to for the rest of my life.  I spent a lot of time lifeguarding on the beaches in Sydney which enable me to travel a lot. The time I spent overseas was all about exploring food, exploring surf…I learnt a lot and I’m very curious about the world.

IW- What type of cooking inspires you?
HQ – The food that I know other people can cook and is achievable. To be honest I’m just a normal guy, I was a lifeguard two years ago. I love food, sharing tips, tricks and keeping it simple.

IW – With that being said what is the most technical dish you have made?
HQ – A croquembouche from the Master Chef challenges. I don’t do pastries!

IW – When was the last time you licked the bowl? And what did you make?
HQ – My new book,  Dish It Up, is out in December and there is an awesome M&M brownie recipe inside. It’s soooo good!

“Food is a direct connection to an experience” – Adam Liaw 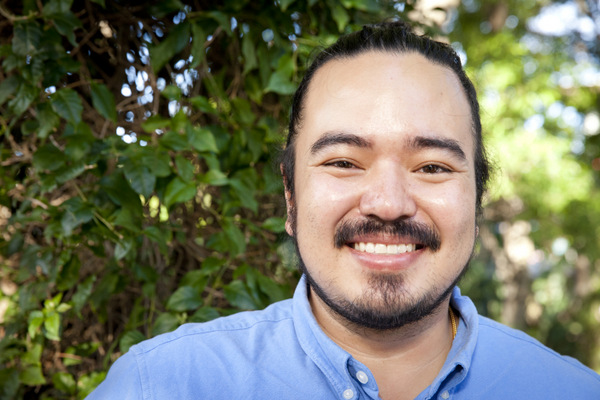 Adam Liaw - Adam Liaw is a cook, television presenter, author and the winner of Master Chef 2010. He has a passion for cooking authentic Asian cuisine and received praise for his bestselling book, Two Asian Kitchens.

IW – Hi Adam, what do you love about food?
AL – Food is a direct connection to an experience. If it is preparing a meal with your family or if you’re going on holidays and you eat something that’s grown from that region, food is the one thing we do that directly connects us to our surroundings.

IW – Is there anything in the food world that excites you right now?
AL – Food is something where there is always a surprise around the corner.  Right now I’m cooking a lot of Korean food. But next week I may be back to Japanese. It’s exciting to be able to explore so many new things.

IW – How has the food landscape changed in Australia over the last 20 years?
AL – It’s a fantastic time to be an Australian in food. We’ve come along so far, and we’re starting to develop this unique cuisine that we’ve never really had before. We’ve had a mix of European influences from our British history, the migrants from the Mediterranean during the 50s and 60s, recently the Chinese, Thai, and Vietnamese and now the Middle East and Africans. Our food scene is becoming one of the most diverse in the world and I always say that Australia is the best place in the world to eat Asian food because we have authentic food from every part of Asia here.  We are literally the only place in the world where you get that.

If you go to the USA, Asian food is primarily Korean, Chinese, and Japanese, they don’t have the South East Asian connection that we have in Australia. You go even to other countries is Asia and you can’t get good Korean food in China, and you can’t get good Chinese food in Vietnam. But you can get all those things to an extremely high standard with great produce authentically here in Australia.

IW – When was the last time you licked the bowl and what did you make?
AL – I always lick the bowl! It was a sticky date pudding.