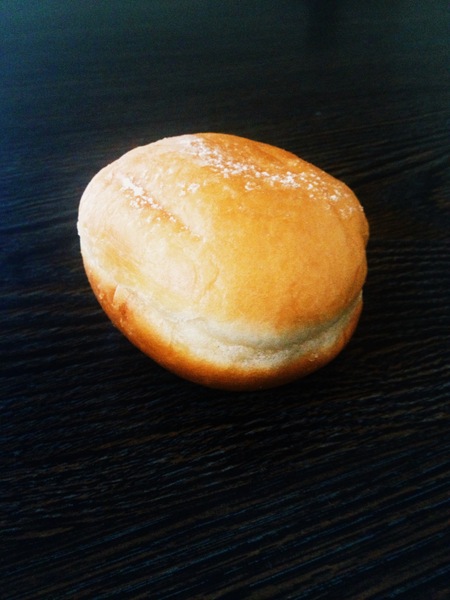 Written By: Katie Gonzalez
Hanukkah may be known as the ‘Festival of Lights’ but as far as I’m concerned, it’s the festival of (fried) food. In Israel, a Hanukkah favorite that is taking over local bakeries and grocery stores is sufganiyah, a small, deep-fried donut stuffed with jam. 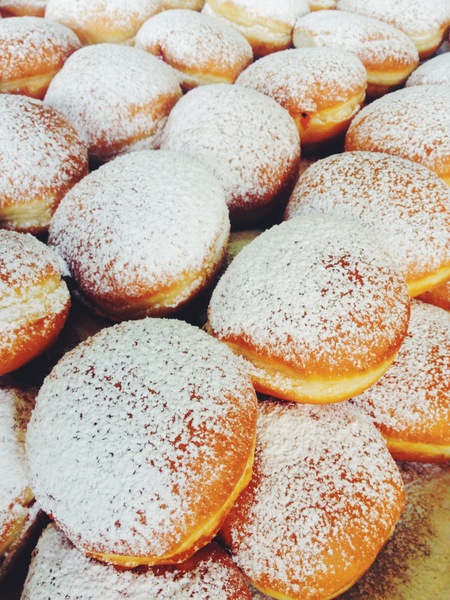 Although the one-every-70,000-year convergence of Thanksgiving and Hanukkah, known as Thanksgivukkah in the US media,  isn’t causing as much excitement overseas as it is in the United States, it didn’t stop me from visiting Shany Bakery inHaifa for a few jelly donuts. 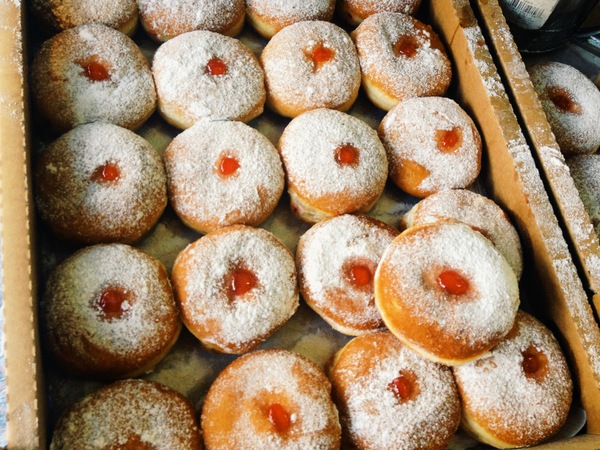 Over in the US, talk of Thanksgivukkah is resulting in a culinary capitalization by several store owners. NYC’s Zucker Bakery, for example, is taking its own spin on this week’s double-holiday celebration with a special flavor of sufganiyah. Instead of plain sweet dough and berry filling, Zucker Bakery has introduced the spiced pumpkin donut with turkey-cranberry filling to a roster of seasonally-appropriate bites.

I got on the phone with Zucker Bakery’s owner, Zohar Zohar, an Israeli native who has been celebrating Hannukah with sweets since she was a little girl. Zohar shared that the concept of taking such an unconventional twist on the sufganiyah might seem strange, especially to Israelis, but “when you taste it, you’ll get it. It works.” 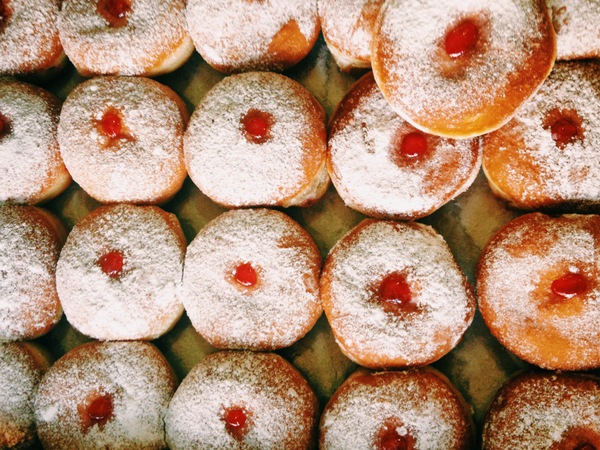 “I don’t think they mess up tradition,” Zohar said. “I think they combine the two holidays and do it in a really nice way.” Zohar, whose favorite item from her bakery’s holiday offerings is the sweet potato donut stuffed with marshmallow filling, said that, despite the emergence of new flavors and flashier treats, she still understands the draw of the old-fashioned sufganiyah.

“I grew up on the jelly donuts,” she said. “They’re something to wait for.”

Meet Countlan’s Newest Contributor: Katie Gonzalez who is based in Haifa, Israel. She maintains a personal travel blog, Slouching Towards Haifa.

01 How did you start writing?
I first started writing for my college newspaper, The Dartmouth. Since then I’ve held various writing internships and positions, with news outlets like MSNBC’s The Daily Rundown and the online publication Your Middle East.
02 What do you write about?
I hope to continue to write about whatever piques my interest, but I’m particularly attuned to current events and culture in the Middle East.
03 What is the most interesting thing that you have learned culturally from living in the city and country you are based?
Being based in Israel and visiting places in Palestine, I’ve learned that the current ongoing conflict isn’t something that can be solved by individuals who remain removed from the issues that the people here deal with everyday. Being a part of society here has really opened my eyes to the complexity of it all. There’s no better education, than speaking with people from all walks of life and backgrounds.
04 Where is next on your list of places to travel?
My next trip is to Cairo, Egypt, in just a little over 24 hours! I’m heading there for the American Thanksgiving, and will tour the city with a friend for the next five days. I’m very excited, but also recognize the importance of safety when traveling (often as a single women) to contentious areas of the world. It’s good to do your homework!
05 Best meal of your life was…..
I’ve been a vegetarian for 12 years now, so I enjoy anything with tofu. But my favorite meal was probably a seitan meatloaf at True Bistro in Boston, Massachusetts. My 24th birthday dinner at Windows Restaurant in Geneva, Switzerland comes pretty close, though!
06 Do you entertain at home?
I love to entertain at home, although always having a small, rented space definitely presents its challenges. I’m still finding my signature serving style, but champagne is always a must.

07 How did you name your blog, Slouching Towards Haifa?
The title is adapted from a book of essays by one of my favorite authors, Joan Didion.
Anytime Donut Recipes To Try
Tags: donut / donuts / doughnut / Entertaining Idea / Guest Post / Haifa / Hanukkah / jelly donut / New York / Thanksgiving / thanksgivukkah
0 comments