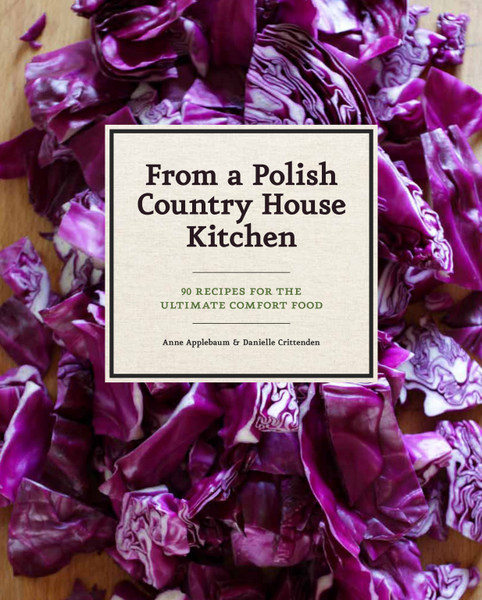 The Reemergence of Polish Cuisine: Beyond Pierogies

Today we are celebrating the launch of Countlan Issue 03.  Have you checked it out yet?  Like a mama duck- we are so proud!

In Issue 03 we published an article on Polish Pottery which had our heads turning east and craving more information on what’s doing in Poland.  It just so happens, one of our contributors from Issue 03, Gretchen of the blog, Culinaria Libris, reviewed a cookbook on Polish cuisine.  Just the information we were looking for to further our quest for knowledge.  The bonus- the source of information was in cookbook form.

Anne Applebaum and Danielle Crittenden published a terrific cookbook titled ‘From a Polish Country House Kitchen‘ (Abrams and Chronicle) that not only provides a comprehensive overview of modern and traditional Polish dishes, it also cradles the dishes with a series of anecdotes and history- so the learning quotient is high.

I had the good fortune to interview Anne and Danielle to get the low down on the reemergence of Polish cuisine.

01 Why is it the case that you never hear about a “cool” Polish recipe?  Is Polish cuisine reemerging on the international food scene?
We can’t predict the future world domination of Polish cuisine, however the Guardian was moved to call it “the new Provence of food” after reading our cookbook. There are “cool” Polish restaurants emerging — in London, Toronto and elsewhere, mostly where there are pockets of Poles living who, like us, recognize what has traditionally been seen as Polish is outdated; their mother’s or grandmother’s cooking, so to speak, much of it too heavy or plain for modern tastes. Poland has enjoyed one of the most successful recoveries from Communism in Eastern Europe. There has thus been a creative, and almost joyful, re-exploration of their traditional cuisine, but with the resources and abundance of ingredients to really improve it and expand upon its essential elements.

02 Beyond borscht, poppy seeds and pierogies, what exactly is Polish cuisine?
Poles eat game — duck, deer, and boar — the way North Americans eat chicken, beef and pork. They have wonderful and exotic ways of preparing it, often with fruit sauces.

We tried to capture this by including several recipes for game, which is becoming more and more common in North American markets, especially farmer’s markets: We offer a duck breast with a pear ragout; a roast loin of boar in sour cherry sauce; and several recipes for venison, including paillards in mustard sauce. “Borscht” is actually the Russian version of beet soup — Poles have many varieties of their own.

In our book we offer several recipes, including a traditional barszcz,which is a flavorful and reduced broth accented with creme fraiche. But we also include a less familiar recipe, one you rarely find outside of Poland but is exotic and delicious, almost a Polish version of gazpacho called chlodnik. This is a cold soup in which chopped beets are marinated with kefir or yogurt, and then mixed in with cucumber, dill, and even a couple of hard boiled quail’s eggs. It is perfect for a summer lunch, and is beautiful to behold: the beets turn the yogurt into a streaky pink, like a sunset.

Even the humble pierogi has been elevated: all over Poland cooks are experimenting with it like dim sum. You can still get the classics: with potato, farmer’s cheese and fresh peas, or wild mushrooms simmered with sauerkraut. But we’ve included a recipe for pierogis with duck and red cabbage, in a Cointreau butter sauce, that we came up with when we had some leftovers from another recipe.

03 Where is Polish cuisine headed?
Probably in the same direction as current tastes: Lighter, fresh dishes using seasonal and organic ingredients. In many ways Poland has always had a “farm to table” movement. Under Communism, often the only way a Pole could have a fresh vegetable was if he grew it himself. Anne writes in her introduction about the “meat person” or the “egg lady” everyone knew about who formed an underground marketplace during the Communist era. Now they still exist — just openly!

04 What inspired you to co-author a cookbook on Polish cuisine?
Danielle tells the story in her introduction of a group of Anne’s American friends coming to visit her and her husband Radek a few summers ago, at the gorgeous Polish manor house the couple rebuilt post-Communism. Everyone was knocked out by the “new” Poland — and especially its food, which, as we’ve noted, is quite different from what you experience in North America. Anne cooked meals with ingredients pulled straight from her garden — plums, arugula, etc., with meat, such as venison, provided by her neighbors.  The house, as you can see from the photographs, is simply magical. Danielle urged Anne to write a cookbook based on the new cuisine and photographed in the house — to capture this “Polish food revolution” that had arrived. Anne was writing her second major work of history (the recently released, Iron Curtain), and insisted she didn’t have time. So Danielle said she would help, and that’s how it came about. Anne tracked down recipes in Poland and wrote the whimsical, historical/cultural introductions to the recipes, while Danielle further researched recipes and did all the testing in her Washington, D.C. kitchen (not least to ensure the recipes would work for a North American audience). As Danielle says, neither of us are likely cookbook writers, but we both share a love of cooking and entertaining, and this type of food translates perfectly for fun, tasty, casual suppers — whether you are hosting a group of politicians and intellectuals, or just your own family.

05 What was most difficult about making Polish recipes accessible for an international audience?
That was the easiest part actually. We left out things like “Duck Blood Soup.” But Polish cuisine is inherently accessible, the way Italian food is inherently accessible. It relies on mostly simple, readily available vegetables and meats (with the odd exception of game); these ingredients are then stewed or roasted or turned into soups. When you live in a culture with long winters, you get very creative with such things as potatoes, cabbages, root vegetables, sausage and cheaper cuts of meats. The Polish love of pickles, mustards, sauerkraut, fruits etc. lend these otherwise simple dishes  an element of the exotic and new to palates unfamiliar with this type of cooking. We think those bored with many North American cookbooks will find these recipes original and tasty, and yet not overtaxing or overly unfamiliar. As we are both mothers aside from everything else, we had a rule that anything that was too time consuming or difficult to make did not get into the book.

06 What are your favourite Polish dishes?
Danielle: I’d really like to answer on behalf of my kids, who are deeply disappointed I am no longer testing Polish food every day. They LOVE Polish food. Their favorites: pierogis of course, but also many of the soups they never get to taste in the U.S., such as our white barszcz, which is a hearty, slightly creamy soup made with sour dough bread, sausage and marjoram; our “Chicken in a Pot” which is poached chicken served over potatoes, kasha or rice with a fragrant lemon sauce; and turkey patties with a rich gravy. Personally, I always love the opportunity to cook some of our more elegant dishes for company. Among my favorites are the stewed beef rolls stuffed with wild mushrooms, or the rack of venison with celery root puree.

Anne: All of the soups! It’s the thing the Poles do better than anyone else in Europe

07 What does Poland’s culinary landscape look like these days?
Experimentation with native recipes is always popular: pierogis with different fillings, new ways of cooking beets or cabbage to make them fresher and tastier. More restaurants are looking for food with organic origins, or very local origins, whether fresh fish on the Baltic or wild game. A number of entrepreneurs now make exotic forms of mead – a fermented honey drink – as well as unusual liqueurs and vodkas.

08 Which Polish chefs are worth keeping an eye on?
Magda Gessler and Marta Gessler – who are not related, but did marry into the same family – are probably the two best known in Warsaw. If you visit. go to one of Magda’s restaurants – Ale Gloria or U Fukiera – or to the quirkier Qchnia Artystyczna which Marta Gessler runs. Another Gessler-family venture is U Kucharza, which is in an old hotel kitchen.

One Response to “The Reemergence of Polish Cuisine: Beyond Pierogies”